The last couple of months have been pretty intense when it comes to travelling. Only a week and half after we got back from Australia we were heading off to the Pagan Spirit Gathering in Illinois. I went to the PSG in 2010 when it was in Missouri and, apart from the intense heat and humidity, I had the most wonderful time with this community, so I was really looking forward to this event. I left the UK in full rain-weather gear, to be met in Chicago by 30 degree heat and sunshine. Lovely! We were picked up at the airport by Shaun, who had just picked up Crystal, one of the other presenters – while they were waiting for us to come out they said they were looking for a Pagan-looking musician – obviously they had no trouble finding us and soon we were on our way to the site. 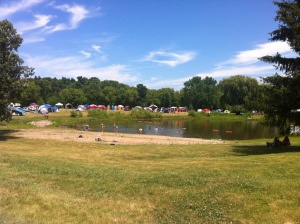 This year’s PSG was being held at Stonehouse Park, a wonderful space with a swimming pond, showers, static trailer caravans, a shop, a great stage area, and SUNSHINE! A few people were complaining about the heat but after what we’d just been through in the UK I loved every minute of it and soaked it up. On the first night we watched Arthur Hinds (from the Pagan/Celtic band Emerald Rose) play a great unplugged set. Then it was up in the morning for the Town Meeting to play my first song to the community. This camp really does try to create a cohesive community and the morning Town Meetings are a good part of why this works. It brings everyone together, and prepares them for the day ahead. I was due to play my first gig that night so had been asked to play a song at the meeting. I have to say I was pretty nervous. But I stepped out and played Green and Grey. This song, probably of all of my songs, seems to be one that really speaks to the heart of Pagan people. By the second chorus the crowd were singing along – a great start to the day.

Evening came and I went to the stage area an hour before I was due to play for set up and sound check, but there was no sound engineer there. He was coming and 7.30, half and hour before I was due on stage. Okay, I thought, it’s only me and a guitar, that should be fine. But I had also asked Arthur Hinds to join me on drums for a couple of songs… Anyway, at 7.30 the sound engineer arrived. Got the guitar working, but no vocal, then got the vocal working, and lost the guitar, then got Arthur’s Bodhran working, but with a half second delay coming through the speakers, oh, and then neither my vocal mic, nor my guitar worked. We carried on like this for 25 minutes and people were arriving. I hate sound checking in front of an audience, but I had no choice. Arthur decided that it was far more 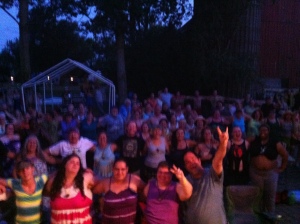 important to get my vocal and guitar right, so left the stage – sadly we weren’t going to be playing together tonight. At 5 to 8 both my vocal and guitar were coming out front of house speakers, but no foldback, so I couldn’t hear what I was playing. But by then it was too late, so I had to start. In the end the gig was amazing. The people were amazing. Since my last visit to PSG in 2010 something must have happened as lots of people knew the words to the songs and we had a great night together, with everyone joining in at the end to Wild Mountain Thyme – I had to take a photo from the stage. 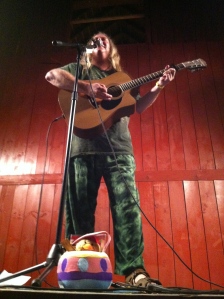 I did have help from another musician on stage that night… while I was in Australia I was given a little cuddly duck called D. D. Rock, complete with a travel diary. The idea was that D. D. would travel with me to the USA, appear on stage with me, I would fill in the travel diary, and then I would pass him onto Celia who would do likewise and pass him onto another Pagan musician. D. D. would travel through a lot of hands, with each musician/band filling in the diary. When he makes it back to Australia he’ll be auctioned off and the proceeds will go to Doctors without Borders. A great idea and a great cause. So he jammed with me onstage, and later I passed him over to Celia. From there he went to Arthur Hinds, then to Beltana Spellsinger, and from there, who knows.

Over the week I played an unplugged night set, and another set at noon on the last day. Each one was great fun. For the last two songs of my noon set I was joined on stage by Arthur Hinds, Celia and a band that will be huge in the Pagan community in coming years, Tuatha Dea. It was an amazing jam session with the most awesome energy raised! I think some people caught in on video so hopefully I’ll get the chance to see one of those. I also took part in a men’s ritual (whilst the women of the camp 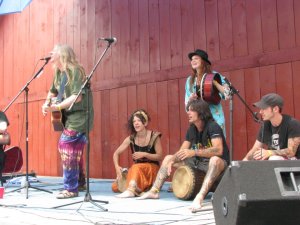 were exploring women’s mysteries). I won’t go into detail here, all I can say is that it was an honour to stand with maybe 200+ men in circle, and take an active part. There seems to be a lot of opportunities for Pagan women to meet up for magic, but not so many for men. I think this is something we should explore more within our communities here in the UK.

Another wonderful event was the Pagans around the World Panel. These  panels are very popular at camps and conferences in the USA, and are becoming more so here. For a couple of hours the panel were questioned about the differences and similarities between Paganisms around the world. My music has taken me to many places and many communities and the one thing I’ve realised is that there is a massive area of common ground between Pagans worldwide. When we work from this place of 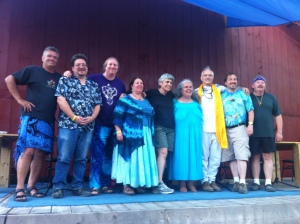 common ground great magic happens. Trouble only seems to occur when we are working from our own personal ‘detail’, trying to get others to think, feel and act in the way we do about our own Gods, practices etc. Open rituals and camps that come from the place of common ground really take our community as a whole forward together. So I was standing on the stage with Selena Fox and Margot Adler – two huge influences on my Paganism in my early days. It was a great honour for me, and these two powerful women continue to be such a huge inspiration. 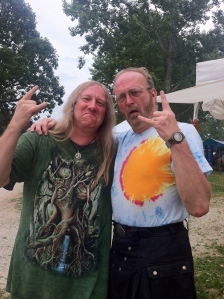 So much more happened during the week, but I think I’ll keep those as memories. Saying goodbye was hard, but I hope that this wasn’t my last visit to the wonderful PSG. I now have a month in the UK with gigs here, then it’s off to play my first gig in Canada in August.

So I’ve been home for a few days now and have had a little time to reflect on my time in the USA. Thinking of the Pagan Spirit Gathering I have one overriding impression – that there is a worldwide Pagan community. Some people say that Paganism is so diverse that it has ceased to be anything more than a word to describe a fractured spirituality. That there is nothing that holds it together. But for me that view was proved utterly wrong when I crossed the Atlantic ocean to play music, and offer a couple of talks, to over 900 American Pagans and find that I feel utterly at home – that the rituals, the chants, the viewpoints being discussed, the general vibe of the camp felt just the same as our Anderida camps, and that these also share much with other camps and events that are happening throughout Britain. Maybe it is just that Paganism appeals to people on a spiritual quest, and that after a while their path might lead away from it, so they can continue their Journey elsewhere. I wonder whether those who see Paganism as fractured are just being called away from it, and rather than just open to that new path, they see their old path as broken, rather than their new path as a continuation of their life quest – who knows. Any relationship can end in either co-operation, or anger, and I guess spiritual relationships are no different… So I’ve come away from the PSG feeling a renewed hope, a renewed connection with my own quest, and a revitalised energy to do even more in service of this community I love so much.

The PSG also gave me time to reflect on my appointment as Pendragon of the Order of Bards Ovates and Druids. As darkness fell one night I walked to the ritual field to see a massive candlelit Labyrinth. 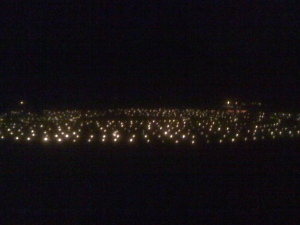 Some people were sitting, just looking at this beautiful thing, whilst others had been called to walk it. I sat for a long time, looking at the spiral path laid out before me. Thinking of it as my own path that, although it has appeared to take sudden twists and turns throughout my life, had been just one path, spiralling, but leading me directly to where I was sitting now. The decisions I’ve made, the changes I’ve undertook; learning to play the guitar, sending off a stamp for the OBOD course, giving up my own company in the Agri-business as I just couldn’t square it with my spiritual beliefs anymore, relationship changes, making friends, and losing some along the way, had all led me to this point, and to taking up the sword for the Order.

The peace of the night was enticing, and so I stood and walked across the threshold into the Labyrinth. Around the outer edge altars had been set up in the four directions, so at each I stopped and made my offerings and prayers. It was a long walk to the centre, with plenty of time to think, to remember, and eventually I came to the centre. Here I sat, soaking up the night, feeling the circling, spiralling people who were either walking into or out from this still point all around me. And there I opened even more and listened.

The Pagan community exists, without doubt. I think it is coming of age and is calling out for a rite of passage. But just as our modern society has abandoned these so we no longer mark when a child becomes a man (other than being able to drink legally), or when a girl becomes a woman, it’s up to us to guide it though this process. After all it is us who are the Pagan community – our spirits make up it’s body. Although we can sometimes see our own bodies as separate from who we are, just a vehicle to carry us around, it is good to recognise that the body, the community, is not separate, and if it is nurtured, honoured and loved, it’ll serve the whole, and the individual.