Well, not so much an influence, as a Kindred Spirit. 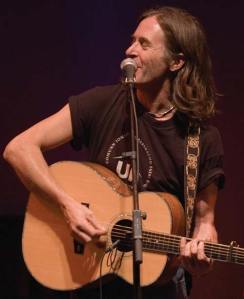 Me and Cerri were on holiday in Scotland, travelling to some of the Herbidean Islands when, at breakfast time in one of the B & Bs on the Isle of Skye, I heard this song being played. It was a lovely B & B and I had fallen in love with Skye, but it was to give me an even greater gift on that morning. As I listened to the song I simply fell in love with it.

I write songs that I would listen to myself, I mean, if I wouldn’t listen to it, why would anyone else right? And here, drifting though the speakers of this B & B was a song that was about the closest I had ever heard to the kind of music I was trying to create. I asked the waitress who it was and she told me it was a Scottish folk singer/songwriter called Dougie Maclean.

When we left the B & B for that days trek, one of the destinations was a music shop to see if I could find a CD from this man. There, hidden in the rack I found his album Roif. I popped it into the car’s CD player and I knew I’d found a musician that spoke my language, he even sang in the same key as me. The themes of his songs were certainly rural, and some also held within them a Pagan edge too.

I played that CD all over the rest of our Hebridean holiday (Cerri was admittedly a little tired of it by the time we got home…) but then I bought the rest of his albums, and fell in love with each and every one. A few months later I saw he was playing at a small venue near us in Sussex so I bought tickets, and when I saw him live he even entertained and communicated with the audience like I do!

His voice and songwriting is a joy, and his love of the land, and old traditions is palpable. If you like my music, you would love Dougie. So have a listen and watch these videos and, like me, I think you’ll be drawn into his world, and fall in love with his music too.