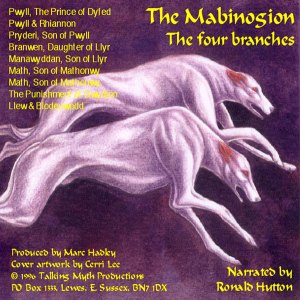 1995 – I saw Fiona Davidson play the harp. Went to my first Druid camp where I met Siggy, and there I played the harp for the first time. I fell in love with the instrument. I also met Andy Letcher, Bard and Storyteller, and heard him tell his tales and play his music.

1996 – At a PF conference I bought a copy of a double tape album of The Mabinogion, told by Ronald Hutton.

I was a sales rep at the time – travelling the country in my company car, visiting farm stores, staying in pubs and inns whilst on the road. After I finished work for the day I also had time to visit the stone circles, long barrows and other ancient monuments that were in the area I was visiting at the time. But there was lots of driving between meetings. My area spanned from Cornwall to Scotland up the western side of Britain. I spent a lot of time listening to music, but I was also keen to learn the tales of this island. So when I found the tape that took over, and I spent miles and miles listening, learning, repeating, thinking about the underlying currents of meaning behind each tale, honing my Bardic craft.

The Queen Elizabeth Bridge over the Thames had yet to be opened. There was only the two-way Dartford Tunnel, and my day often started with a half hour queue to get through and on my way. Many times I caught myself looking across at the car beside me, quoting tracts from whichever branch I was learning that day, and seeing the odd look from the driver within. I just smiled and pointed to the car phone…

Some years later and I’m working for the Order. My suit has been hung up only to be taken out for weddings, funerals and the occasional visit to Glyndebourne Opera House. But I find the tape once more entering my life as the creator passes over the distribution to the Order, and for a number of years I am posting the tapes out to members all across the world. But progress is unstoppable, and the CD took over, then even this great breakthrough in audio technology begins to fade as the download starts to take hold… The Mabinogion, read by Ronald Hutton, disappears for many years.

Then about 6 months ago, like some archaeological expedition, we find an old copy, unplayed. I took it to my Dad’s house (he’s the only person I know who still has a tape deck!) and played it. I’m instantly transported back to those times. The recording still sounds fresh, exciting, and we knew what we had to do. I recorded it onto my MacBook and started the re-mastering process through Apple Logic Studio. It took quite a while to get it right. To me audio has to be as near perfect as it can be before I’m happy to release it into the world. I was working from an analogue tape, complete with hiss, and that all had to go. I also got to the final tape and found that the tape had suddenly slowed down, reducing Ronald’s voice to that of some kind of Dr Who creature. So it was once more back to the beginning with that one.

But on Monday it was complete. I uploaded it to CDBaby, and it’s already beginning to appear on iTunes. It really is a classic performance, and really should be available again. So go and have a listen. If you know the tales, this re-telling I’m sure will inspire knew connections. If you haven’t heard the tales, you now have the gift I had, and be prepared for a journey through time, to hear the tales that introduce us to Gwydion, Arawn, Arianrhod, Blodeuwedd. But as with any myths, listen to the deeper meanings, not just the human tales as they evolve. There is magic here, so step through the hollow hills, and into Annwn once more.

To find it on iTunes just search The Mabinogion in the iTunes store, or click here to go to CDBaby – enjoy!

13 thoughts on “Return of a Dear Old Friend – The Mabinogion”