Last weekend me and Cerri went to the Mercian Gathering near Coventry. I had a gig on the Friday night, and Cerri had the opportunity to have a stall outside our tent where she could sell some of her artwork. Last year I had strained my back so barely made it up there to play the gig, and then it rained solidly all weekend and some people had to be towed from the field. This year some kind of Karmic debt needed to be paid and sure enough the weather was lovely. A few little sprinkles of rain, but nothing like the deluge of last year.

We had a pretty good drive up and arrived around 4pm on the Friday, to be greeted by members of the Mighty Dagda security team. These people give so much to the Pagan community in Britain, camping by the gates of most of the festivals and keeping the participants safe. They are a Pagan National Treasure! Hugs a-plenty with the Dagda crew was followed by tent pitching, and a brew. It was chilly, and a little gusty, but the weather report said that would clear over the weekend.

We gathered around the unlit Labyrinth for the opening ritual and it was then I realised just how many people were there. 850 apparently, which has to make it one of the biggest, if not the biggest, Pagan camp in the UK. It was amazing to see, and stand in Circle, with so many other people. The opening ritual dance through the Labyrinth hailed the beginning of the festivities, so I headed back to the tent to get my instruments, and made my way to the main marquee. I was due to play at 10.30pm after my good friends Sco 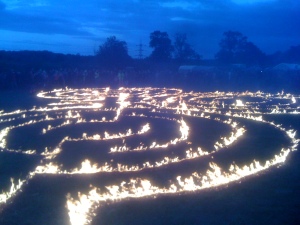 tt Jasper and Susan Garlick (AKA Dragonflymoon). They did a great acoustic set to a packed house ending with some rousing chants. Groovy!

I tuned up pretty quick and dived onto the stage area. The applause was loud and immediate. I could tell straight away that we were in for a good night together. I’ve tried to open with other songs, but Song of Awen always sets the tone so well, after that I went into Green and Grey, but pretty much after that requests started to be shouted out, so the set list went out of the window very early! It was lovely to just play what people wanted, with a new tune here and there too. I didn’t take a break, just played through about 90 minutes before I said goodnight. Not… so… fast… An incredibly loud cheering audience could keep me playing all night, and they almost did! I probably played another 30 minutes, so it was about a 2 hour set in the end. But eventually the last note was played. I could still hear the audience in my head for most of the night, reliving moments we shared together.

The next day I noticed a lot of missed calls on my phone – I’d forgotten to take it off silent mode. When I called I found out that Zakk, my eldest Son, had fallen off his bike and had a compression fracure on his wrist. He was in hospital awaiting an operation. I found out about 2pm. I really wanted to go straight home, but everyone said that it was all under control, so with reluctance I stayed put. About 30 minutes later my Mum phoned and said our dog had lost the use of her back legs after taking a tumble chasing a ball! I sat for most of the day worrying until I heard that Zakk was out of surgery and the dog was back home. When you travel as much as me it’s always possible that things like this could happen, but it was really hard being so far away, and not being able to do anything. We spent most of the day by the tent and Cerri’s stall, which was a lovely distraction – meeting people as they walked by, and watching the Witchmen Morris. The wind had dropped too, so it looked good for the evening Labyrinth and Wickerman ritual.

At 7.30 we all gathered once more by the Labyrinth as it was dowsed in lamp oil by the crew. Dusk soon fell. It was lit an

d looked amazing. Some fire dancers walked through with poi and then we were all led through in a mass of 850ish chanting Pagans. As we walked out we were guided to walk to the field where the Wickerman had been prepared. All day people had been placing wishes, prayers, burdens, on him, and now he stood proud, our proxy sacrifice, ready to send these to the Old Gods. We stood in a horseshoe shape before him, and flaming arrows were fired. He lit well, and soon 20-30 foot flames were sweeping into the sky. A great cheer sounded as finally he slowly began to keel over, and tumble in a mass of flames, to the earth. The Circle span, drums pounded, energy was raised, and then the fire-jumping began. Our messages sent to the Old Ones to do with as they wished.

I love the way that spectacle and drama have returned to Pagan camps, and the Mercian crew of the Hearth of Arianrhod do it so well. All of the profits from the Mercian Gathering go to their chosen Wildlife Charity, and they’ve raised something like £11,000 so far. Such amazing generosity. Anna, Sue, Oliver and their crew are wonderful! As we left I managed to have a hug with Anna who booked me again for 2010, and I tell you what, I can barely wait to get back in that field again!! To the Old Ones!

As soon as I got home I went to see my Son sporting his new fashionable arm wear. Here are the pictures of the injured pair! 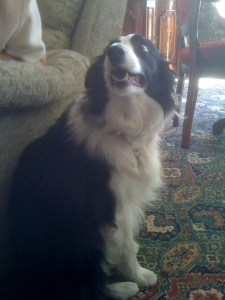 2 thoughts on “Tales from the Road – To Mercia!”